David Abulafia: “Where Catalans Fear to Tread: The Catalans in the Medieval Atlantic” 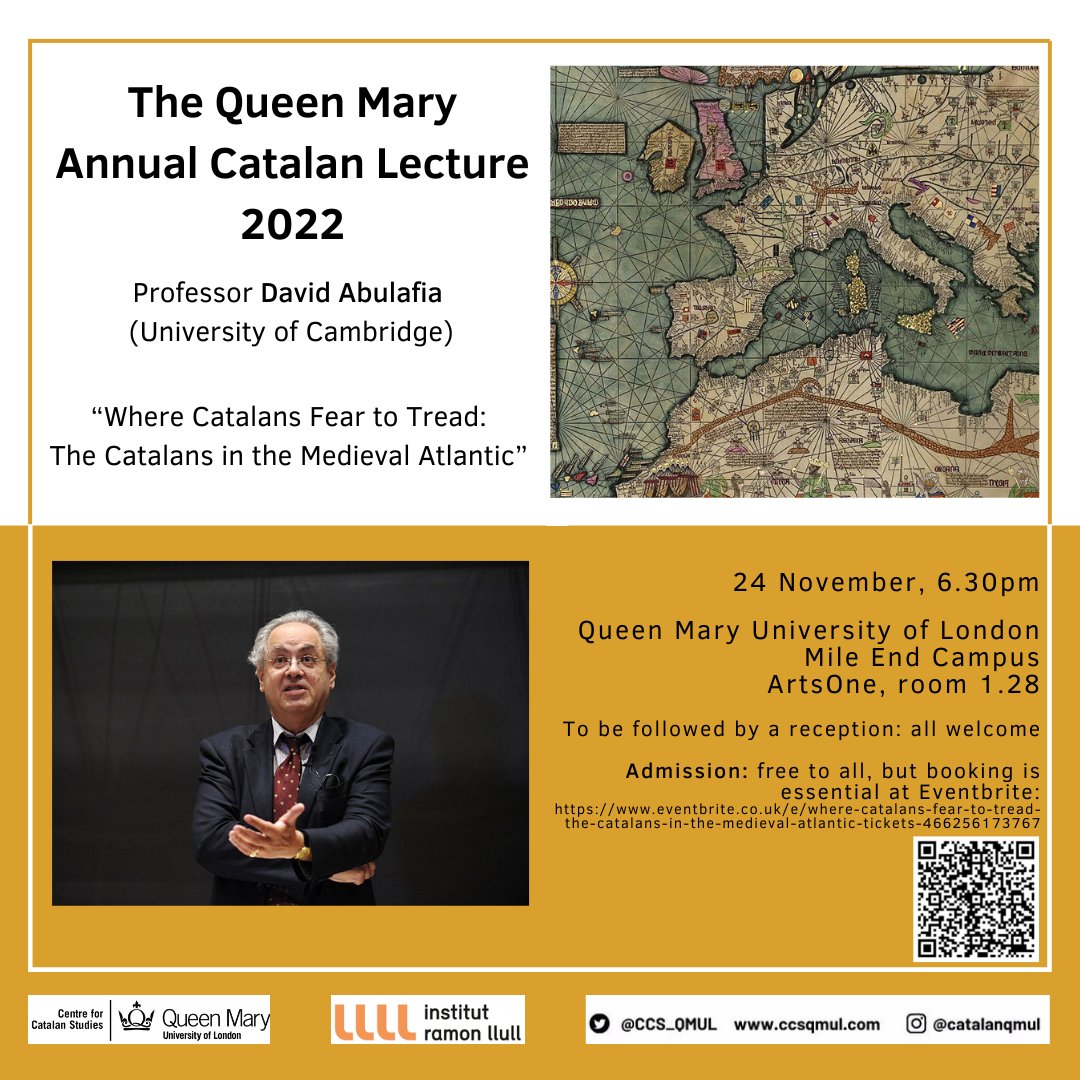 We are delighted to be welcoming the historian Professor David Abulafia (University of Cambridge) to give the Queen Mary Annual Catalan Lecture this year, on 24 November.

He will speak on “Where Catalans Fear to Tread: The Catalans in the Medieval Atlantic”.

For the Queen Mary Annual Catalan Lecture this year we are privileged to welcome the well- known artist Antoni Muntadas. In this personal view of the decade starting in 1970, he will be talking about the art scene in the city where he was born. It was a period of great change, from the final stages of the Francoist dictatorship to the transition to democracy. Conceptual art and counter-cultural practice became prominent.

Organised by the Centre for Catalan Studies in collaboration with the Queen Mary Visual & Material Forum.

(followed by an interview with Lluís and questions from the audience)

Originally from Barcelona, Lluís Coloma is the ambassador of blues & boogie-woogie in Spain and he is recognized in Europe and Asia as a virtuoso on the piano in these styles. On this occasion, he will present his new CD “Piano Solo”, which has already garnered praise (“strongly recommended”, Jazz Journal.)

Over the years, for Lluís, the piano has become an extension of his own body, the perfect instrument to express himself in a natural, spontaneous and unique way. Solo in front of the piano Lluís creates his own compositions, interprets some personal favourites, and paints surprising textures always imbued with blues and boogie-woogie, which are the roots of his very varied influences. He’s created a cocktail of styles that over time has become his own signature sound, where each theme is a landscape within his own musical universe. Lluís is no stranger to the UK and has played at the Cadogan Hall, in London.

This is an exclusive concert, commissioned by the Centre for Catalan Studies, Queen Mary University of London.

Nations without States: Catalonia and Scotland

As Sir John Elliott points out in his latest book, Scots & Catalans: Union and Desunion, in recent years both “Scotland and Catalonia have seen the growth of powerful movements whose goal is independence from the larger political entities, Great Britain and Spain, into which they have long been incorporated”.

Professor Elliott will describe the challenges involved in writing a sustained comparative history of two self-proclaimed nations that are not independent. He will then discuss what he sees as the major turning-points in their historical trajectories, running from the Middle Ages to 2017, and the points of convergence and divergence between them.

Followed by a drinks reception.

“Barça, Catalonia and the Politics of Nationalism”

Barça, Catalonia and the Politics of Nationalism

The well known football commentator and historian, Sid Lowe, will be discussing Barcelona FC and its central role in Catalan nationalism. From the beginning of its existence Barça has been a political force on and off the pitch. How is it, then, ‘més que un club’ in the debate over independence?

Sid Lowe holds a Phd from the University of Sheffield and has lived in Spain for seventeen years. He is the author of Catholicism, War and the Foundation of Francoism: The Juventud de Acción Popular in Spain, 1932-1937 (2010) and the bestselling Fear and Loathing in La Liga: Barcelona, Real Madrid, and the World’s Greatest Sports Rivalry (2013). Sid Lowe is well known for writing on football for The Guardian, but also appears regularly on TV and Spanish radio.

To be followed by a drinks reception

Here you have a report of the conference

What are the tensions when a small culture cultivates a cosmopolitan outlook? How does an author seek the consecration enabled by a major language? Eduard Màrquez’s collection of Catalan flash fiction, Zugzwang (1995) draws on the experimentalism of recent United States narrative to create a distinctly Catalan work. An English translation of the Catalan text can at once expose and interrogate its literary and cultural conditions.

Professor Lawrence Venuti (Temple University) is a leading authority on the theory and history of translation.  His books, such as The Translator’s Invisibility (2 nd edn, 2008), The Scandals of Translation (1998), and Translation Changes Everything (2013), have opened up the study of translation to a wide readership and changed the way we think about the subject. Venuti’s own translations (from Catalan, French, and Italian) include the anthology Italy: A Traveler’s Literary Companion (2003), Massimo Carlotto’s crime novel The Goodbye Kiss (2006), and Ernest Farrés’s Edward Hopper: Poems (2009), for which he won the Robert Fagles Translation Prize.

Francoist Anti-Catalanism in the Spanish Civil War: From the Battle of the Ebro to occupation, pillage and exodus

This lecture explores the scale of Spanish anti-Catalanism in the Civil War.  Franco carried out a campaign of extermination against Catalunya just as he had done previously with other regions.  He did so because he conceived the war as an investment in terror that would be the first step to the establishment of his dictatorship.  Thereafter, to build on that investment, he installed a post-war machinery of trials, executions, prisons, concentration camps and an apparatus of State economic pillage.

Screening History: Television, Memory, and the Nostalgia of National Community

Whether or not television is a proper medium for the transmission of historical knowledge, the fact is that in the contemporary world for most of us the understanding of the past is mediated by visual media. Narratives of recovery and transmission of the historical past play a prominent role in Catalan contemporary television and film, and both the experience of Spain’s transition from dictatorship to democracy and the construction of a collective imaginary associated to that historical process have been mediated by the intervention of media of mass communication. This lecture analyzes Temps de silenci (2001-02), one of the most popular fictional series produced in Catalan television, in order to understand the success of this type of narratives and, in particular, the power of nostalgia in the reconstruction and consumption of the recent past.

Mario Santana is Associate Professor of Spanish at the University of Chicago, where he teaches contemporary Spanish and Catalan literature and film, and coordinates the Catalan Studies Program in the Department of Romance Languages and Literatures. He is the author of Foreigners in the Homeland: The Spanish American New Novel in Spain, 1962-1974, and his most recent publications include essays on the role of translation in Iberian interliterary relations, the novel of historical memory, the literary market in Spain, and the institutional history of Hispanism in the United States.

The focus of the lecture will be on the ways in which contemporary Catalan theatre and
performance have mapped the changing space of Catalan culture in projects that deliberately set out to explore the different layers of identification that construct senses of place in the Catalanspeaking territories. Through analysis of a range of projects since the beginning of the twenty-first century, the lecture will trace how their diverse modes of engagement with the contemporary Catalan landscape, and in particular with the different languages brought into contact within and around that landscape, reveal the Catalan stage as a translation zone of encounter between different identities, languages, cultures and subjectivities.

Helena Buffery teaches and researches in the School of Languages, Literatures and Cultures at University College Cork. She has made significant contributions to the field of Hispanic Studies in three main areas: Contemporary Hispanic theatre and performance, Translation Studies and Catalan Studies, with a particular focus on the relationship between Catalan and the other languages and cultures of the Iberian Peninsula. Recent publications include: Shakespeare in Catalan: Translating Imperialism (2007; 2010); Stages of Exile: Spanish Republican Exile Theatre and Performance (2011); Barcelona: Visual Culture, Space and Power (co-edited with Carlota Caulfield, 2012).

A Catalan Dimension to Films from Spain?

In recent years, much valuable scholarship has been devoted to films from Spain. In this context, however, commentators have preferred an uncomplicated view of nationality and how it relates to cinema. A number of directors, for example, are bracketed simply as “Spanish” when this definition sits uncomfortably with their more complex deliberation on the notion of national identity. It is the intention of this lecture to consider this concern -with particular reference to Catalonia – in the output of a series of prominent filmmakers.

Dominic Keown specialises in contemporary Hispanic culture and has published widely on the ideological dimension of Catalan literature. His publications include Sobre la poesia catalana contemporània (Valencia: Tres i Quatre, 1996), Polifonia de la subversió: la veu col.lectiva de Vicent Andrés Estellés (Valencia: Tandem, 2000), and A Companion to Catalan Culture (London: Tamesis, 2011). He also writes on films from Spain with particular reference to the cinema of Buñuel, Berlanga and Bigas Luna. His current interests extend to the interface between Catalan and Spanish creativity, transnational issues in the cultural production of Catalonia and the metacritical divide between Hispanism and Iberian Studies.